Behind the Scenes: A Most Intriguing Temptation 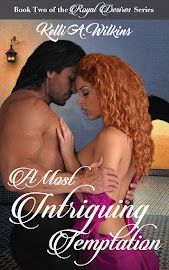 This “Behind the Scenes” blog is part of a series examining my romance novels. In each blog, I’ll talk about why I wrote the book, share my thoughts on the plot and/or characters, and reveal what I loved most (or least) about writing the book. Warning: Blogs may contain spoilers.

The book introduces Elara’s equally headstrong and spoiled brother, Prince Allan. He is an irresponsible womanizer who drinks too much and lives for having fun. To him, business is boring, and he doesn’t take his royal duties seriously. His father (King Maxwell) sends him to meet with Emperor Salizar on business. To ensure the negotiations go smoothly, Maxwell insists Dalton accompany Allan.

When Elara hears that Dalton is going to the emperor’s notorious pleasure palace, she devises a plan to test his fidelity. This sets the stage for the main drama of the book.

Elara sneaks into the palace and impersonates a kharim woman. She calls herself Oonish and begins her deception. She constantly tempts and teases Dalton (in the bath, in the bedroom, and even at dinner). To Dalton, Oonish is nothing but an annoying, dimwitted distraction. Although he admits she’s lovely and appealing, he pushes her away and insists he’ll remain loyal to the wife he loves.

Prince Allan learns about Elara’s plan and warns her that she is playing with fire. Trying to seduce Dalton isn’t fair, and the whole scheme could backfire on her. Spoiler Alert: Allan is right of course, and Dalton does “cheat” with Oonish—but there’s one catch—he already knew Oonish was Elara.

Elara is devastated that Dalton cheated on her—until Dalton confesses he knew it was her all along. That’s when the trouble really starts for the couple. Dalton is furious that Elara snuck into the palace. It’s not safe for any woman, and Emperor Salizar is a madman who despises King Maxwell and Elara. If she is caught in the palace, she will be in real danger. In addition, Dalton feels betrayed because Elara deliberately set him up and doesn’t trust him.

It’s a dark moment for this loving couple, and these events truly test their relationship. Elara is heartbroken and ashamed of herself. She let her jealousy get the better of her and has gotten in way over her head.

When I was writing the book, I loved creating the scenes where Oonish/Elara drives Dalton crazy with her suggestive flirting and arousing touches—and Dalton goes out of his way to resist her. (He even tells Allan to take Oonish for himself.) The push/pull between the two characters was fun to write.

I also enjoyed the scenes between Allan and Elara/Oonish. These spoiled siblings are a lot alike: they share the same sense of entitlement, are used to getting away with their wild and irresponsible actions, and have an off-color, odd sense of humor.

The hardest scene to write was after Dalton “cheats” with Oonish and confronts Elara. All of a sudden, this isn’t a game anymore. Elara finally understands that she has done something despicable by tricking the man she loves.

Dalton wonders if he can ever trust Elara again. Elara is worried Dalton will leave her and dissolve their marriage. It breaks her spirit, and she realizes (a little too late) how awful she has been. This was a difficult scene to write, knowing how it would wound Elara, but she had to be taught a lesson and face the consequences for her actions.

As I was writing, Prince Allan turned into one of those characters who try to take over the story. I fell in love with Allan so much that halfway through writing this book I knew he needed his own book. Readers and fans also wanted to know more about Allan and thought he should have his own book, too.

Allan is the male counterpart of Elara, so I started wondering: what consequences would Allan face for his role in the events? What would happen to him when he got home? I explore this in the third and final book in the series, A Most Unfortunate Prince. (I’ll share more about that book in another blog.)

Here is the book summary and links:

A Most Intriguing Temptation

Aided by her mischievous brother, Prince Allan, she disguises herself as one of Salizar’s sultry kharim women and decides to test Dalton’s loyalty. Masquerading as Oonish, Elara goes out of her way to tempt Dalton at every turn. Despite Dalton’s resolve to resist the indulgent girls, he finds himself falling under the spell of the mysterious Oonish.

The Royal Desires Series is available on Amazon & other platforms. Catch this hot historical/fantasy trilogy from the start:

Book 1: A Most Unusual Princess:

Book 2: A Most Intriguing Temptation:

Book 3: A Most Unfortunate Prince:

I hope you enjoyed this “Behind the Scenes” look at the making of this romance. I welcome questions and comments from readers and other authors. Contact me via the form on my site or on social media.

Posted by Kelli Wilkins at 3:48 PM