Just in time for the holidays...Dark Things II - Cat Crimes -


Everyone knows I’m a cat lover and author of three non-fiction cat care guides. Now I’ve combined my love of cats with my love of horror stories, and I found a way to benefit cats across the country.


My horror short “Just an Innocent Little Cat” appears in this anthology. This collection of tales (tails?) features feline mayhem, murder, and other things you always suspected cats were doing when you weren't looking. Cats you don't want in your worst nightmares and cats you might want on your side against evil. (My story falls into the latter CATegory.)


All proceeds from sales go to several cat sanctuaries across the USA. Enjoy over twenty-one cat “tails” and give a needy cat a new leash on life. (You’d think someone with such a bad sense of humor couldn’t write horror stories, huh?)


And here’s an excerpt:


Chester sat on the bathroom floor with his tail wrapped around his body. He arched his neck and lifted his nose high in the air. Eggs and bacon. Betty was making food downstairs. That left him alone with Danny.


He leapt onto the side of the blue bathtub and sat on the rim, just outside the shower curtain. The hot water was running inside the tub, and he twitched his nose at the harsh-scented detergents filling the room. He studied the shadow of the fat man as he moved around behind the thin curtain.


Last night, he’d decided that Danny had to go. Before Danny came, Betty used to have her lady friends over to visit. They played something called “Scrabble.” Sometimes, the little brown pieces of tile landed on the floor and he swatted them under the couch. It was a fun game. But now, the nice ladies didn’t visit anymore. Danny wouldn’t allow them to come here. This made Betty sad.


After a few minutes, Danny turned off the water and opened the shower curtain. He yelped and stepped back.


“Damn thing! Get the hell out of here!”


riveted his gaze on Danny, then hissed.


“Ma, hey, ma!” Danny screamed and covered himself with his hands. “Get this cat outta here!”


For the record: Chester was based on a real-life highly intelligent orange cat my parents owned. And isn't the cover cool?


Posted by Kelli Wilkins at 5:15 PM No comments:

Something Spooky for the Holiday Season! 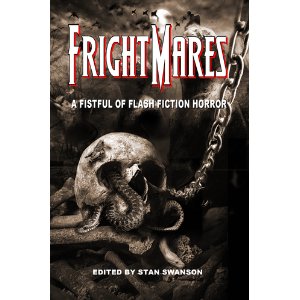 
If you’re looking for a gift for someone who likes to read horror stories - or if you’re a horror fan who wants to tune out the cutesy holiday cheer and explore the dark side, Frightmares is just for you!


My flash fiction horror story, “Death is Just a Tick Away” appeared in Dark Moon Digest’s e-magazine (Issue #1) this summer. And it now appears in the Frightmares: A Fistful of Flash Fiction Horror paperback anthology published by Dark Moon Books. The story is based on a real superstition!


The book is a compilation of dozens of flash fiction horror stories. Each tale is under 500 words and is a quick read. The authors weren’t limited to a central theme (vampires, zombies, or haunted places), so each story is completely unique.


And you can still order a Kindle version of the magazine here: http://www.amazon.com/Dark-Moon-Digest-Magazine-ebook/dp/B005BSSL66/ref=ntt_at_ep_dpt_7


(Note: These links are for Amazon. However, these titles are also available at Barnes & Noble and other online bookstores.)


Next week on the blog I’ll be taking a look back at my 2011 Amber Quill Press romances!

Until next time,
Kelli

Posted by Kelli Wilkins at 3:55 PM No comments: