Spotlight on… A Most Unfortunate Prince 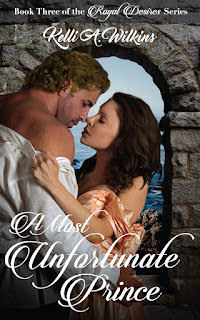 Time flies, doesn’t it? It feels like just yesterday that I released the Royal Desires series, but it’s been a year!

To celebrate, I’m sharing an inside look at the making of A Most Unfortunate Prince. This book is the third story in the Royal Desires trilogy that began with A Most Unusual Princess and A Most Intriguing Temptation. Together, they make up a fun series, but each story stands alone as a separate read. Why? Because when I wrote A Most Unusual Princess, I never knew I was writing a trilogy.

When I wrote A Most Intriguing Temptation, I introduced readers to Prince Allan. He’s basically the male version of his sister, Princess Elara – hedonistic, selfish, and utterly wild at times.

I enjoyed creating the character and it was fun to set him free in a pleasure palace completely without limitations. As I was finishing A Most Intriguing Temptation, I realized Allan needed a book of his own, so I wrote A Most Unfortunate Prince. (Several readers also asked me if Allan’s story would be told, and I was happy to oblige!)

But before I wrote a word, I knew that Allan was going to have to face the music for his bad behavior. At the start of the book (yes, right there on page 1) Allan is banished for his actions stemming from A Most Intriguing Temptation. His father kicks him out into the real world alone and broke, and he’s forced to make his own way in life.

I decided to take this carefree, roguish prince and turn his world upside down. I asked myself: How bad can you make things for him? He has nothing: no food, no fancy clothes, certainly no job skills, and no real sense of identity. He had lived a pampered life where everything was handed to him on a silver platter (literally), and now was in for a rude awakening. I really put the screws to poor Allan and at times left him broken, sad, and utterly miserable.

Over the course of the book, Allan suffers life’s lessons at the hands of his evil employer and falls in love—twice. The story introduces us to Claudette, a sassy seamstress who fancies Allan and helps him adjust to the life of a commoner. Although Claudette appears innocent, she has a secret past and a bit of a naughty side.

Although A Most Unfortunate Prince has a happy ending, it is a bit darker than the other two books in the series. I wanted to contrast Allan’s former easy-going pampered life with his current harsh and gritty existence. (And it broke my heart to kill off a secondary character that I utterly adored. But I found a way to bring him back—at least for a little while!) Readers may also be surprised to discover a few things about Allan, as well. (Even I was shocked when certain events in the story took place—and I was the one writing it!)

Allan’s “fall from grace” and the journey of self-discovery that he undergoes are some of the reasons I love this book. It has something for everyone: hot love scenes, tender moments, mystery, adventure, and suspense.

But what about Dalton and Elara (from A Most Unusual Princess and A Most Intriguing Temptation)? They’re in the book too, as minor characters. Elara and Dalton play important roles in the finale of the story, and we get to see how these lovebirds are adapting to their married life. (Again, there’s a secret I don’t want to give away!) I can tell you that this book wraps up the trilogy in a neat package and everyone is left in a good place.

Links to the trilogy are at the end of the post.

Here’s the book summary and a tame excerpt:
A Most Unfortunate Prince
This time, it’s all about Allan… and he never expected to fall in love!

Can he keep Claudette and his royal title? Or will he lose her forever when she discovers his secret?

Claudette squealed and Allan drew her to him, crushing her against his chest. They were crammed into the wardrobe so close that Allan’s hot breath tickled her face. He draped her arms around his neck, then settled his hands on her waist. At first, she tried to protest, but then gave in when she realized her knees were shaking. Allan was here for her, holding her up.

“Shh, don’t make a sound, no matter what. I won’t let them hurt you,” he whispered.

She closed her eyes and rested her head on Allan’s shoulder. Thank heavens he was here. A second later, she heard the man rifling through drawers and cupboards, knocking cleaning supplies and her sewing aside. How did these men get in? What did they want?

Allan tightened his grip on her waist. Was he scared? Did men ever get scared?

“Bloody hell, where is it?” the man growled, and hit the side of the wardrobe.

Her heart skipped a beat and she took a breath to scream. As she did, Allan’s mouth closed over hers. She squirmed against him, then gave in as her body responded with a will of its own.

Her skin tingled as she kissed him, her lips eagerly seeking his. How long had it been since she’d kissed someone? She opened her mouth wider and drew Allan’s thick tongue in. He clutched her tighter as she twirled her tongue around his.

All thoughts of the intruders vanished from her mind as Allan yanked her lower body closer to his. His hot tongue teased hers and he slid his hands off her waist and cupped her buttocks…

I hope you’ll check out one (or all) of the books in the series. They’re a fun read with a blend of spicy love scenes, humor, and suspense.
If you’ve read the trilogy, let me know what you think. What was your favorite book? Which scenes did you like best? Readers can contact me via the email address on the “News” page of my site or on social media.

Posted by Kelli Wilkins at 12:44 PM No comments:

Spotlight on… A Most Intriguing Temptation 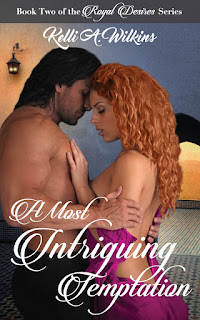 Believe it or not, it's been a year since I released my Royal Desires trilogy. So today, I’m  spotlighting the making of A Most Intriguing Temptation.

A Most Intriguing Temptation focuses on the theme of fidelity. Our headstrong Princess Elara wants to test Dalton’s loyalty, so she masquerades as Oonish, a sultry kharim girl in a pleasure palace. She teases and tempts Dalton at every turn and thinks her game is all in fun—until she gets in over her head and lands in big trouble.

I enjoyed taking Elara out of her element and giving her new experiences. I also got to show a different side to Dalton’s character as he (and readers) learn about his weaknesses and desires. He loves Elara, and yet, Oonish is tempting… This unique storyline was an interesting way to showcase Dalton and Elara’s relationship, discuss their views on trust, and see how they interact and respond to challenges in their lives.

A Most Intriguing Temptation was fun to write. It has a little bit of everything: adventure, humor, sizzling love scenes, an element of danger, and even a drop of sadness. This book also introduces readers to Elara’s charming, womanizing, “bad-boy” brother, Prince Allan.

When readers ask me if I ever have characters who want to “run away” with a story, I always point to Allan. By the end of A Most Intriguing Temptation, I knew Allan needed his own story, and so A Most Unfortunate Prince was born! I’ll be sharing more about him in my next blog.

Here’s the book summary and a brief (tame) excerpt:

A Most Intriguing Temptation

Aided by her mischievous brother, Prince Allan, she disguises herself as one of Salizar’s sultry kharim women and decides to test Dalton’s loyalty. Masquerading as Oonish, Elara goes out of her way to tempt Dalton at every turn. Despite Dalton’s resolve to resist the indulgent girls, he finds himself falling under the spell of the mysterious Oonish.

Bonus! This e-book includes a sneak peek at the third book in the “Royal Desires” series: A MOST UNFORTUNATE PRINCE.

The Excerpt:
Dalton rolled over in his sleep. He heard bells jingling again. What was Oonish doing now? He’d told her to stay in the outer room. He opened his eyes. Oonish trotted around the foot of the bed. The room was dim and shadowy. How long had he been asleep?

“Good, you’re awake, Your Highness. I would not want you to miss anything.”

“Miss what?” he grumbled and tried to sit up. As he did, he realized that his arms were bent over his head. His wrists were tied to the wrought-iron headboard with long pink scarves.

“What is the meaning of this?” He moved his legs and found that his ankles were bound as well. “I order you to untie me, now.”

“Nay, Your Highness. You must stay here and be pleasured. It is my duty,” Oonish said as she unhooked her belt. Her scarves and bells fell to the carpet, revealing her tiny covering.

“You wish for this,” she said, turning her back to him and wiggling her buttocks.

He swallowed hard. Whether he wanted to admit it or not, Oonish was enticing…

Order your copy of Book 3, A Most Unfortunate Prince, here:

I hope you’ll check out the trilogy and lose yourself in this fun and sensual world.
Happy Reading,
Kelli
Posted by Kelli Wilkins at 5:04 AM No comments: